History of The JW Drum Cadence

During the fall of 1971, drummer John Walk was inspired to craft a drum cadence that has gone on to become a Tiger Band tradition. Aptly named “The JW” after it’s composer, this is one of those traditions that will surely stand the test of time. A crowd favorite, The JW drum cadence ushers the Tiger Band and Pride Alumni Band off the field at nearly every performance with cheers and applause.

In his own words:

“Early in the 1971 marching season, we played a band show and the Hudson band was there too. They entered the stadium to a cadence that someone had copied from the song “Mississippi Queen” by Mountain that featured the snare drums, bass drum, and a cowbell. I liked it, it was cool, but it made me jealous. So I decided to write a “rock ‘n roll” drum cadence for the Tiger Band. I wanted to write a cadence that 1) featured all three drums, tenor, bass, and snare, 2) stated a basic rhythmic theme and then developed it, and 3) it had to rock. My inspirations came from different sources including “Wipeout” by the Surfaris, “In-A-Gadda-Da-Vida” by Iron Butterfly, “I’m A Man” by Chicago, “Whole Lotta Love” by Led Zeppelin, and many, many more.

After I got it finished, I called a private drum sectional (no directors) where we learned and practiced this new drum cadence. But, we still didn’t know if Mr. Feldbush would like it, or even let us play it. So we premiered the “J.W.” for Mr. Feldbush and the rest of the band at the beginning of the next Thursday night band practice.

The band loved it. Mr. Feldbush was a little more reserved. At first, we only played it at practice, then at the end of pregame, and finally the demand was too great, we played the J.W. anytime or place that we could fit it in. The next time we saw the Hudson band, we rocked ‘em.” 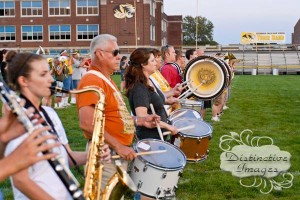